Motorcycle Accidents Increase in the Summer 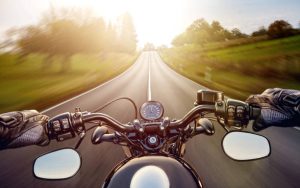 “It wasn’t until I went to college and I got my first motorcycle that I understood the thrill of speed.”  ― Vin Diesel

Motorcyclists ride for many reasons. To riders, it’s a deep passion within them. The freedom gives the illusion that they are flying, and the speed provides a thrill that cannot be compared to any other activity (so I’m told). But… motorcycle accidents will happen-and what’s more-who is at fault and what to do?

Although the exhilaration of riding is indescribable, there are dangers around every curve and intersection. The National Highway Transport Safety Administration (NHTSA) conducted a study of motorcycle accidents, and discovered that most of the fatalities on United States roads involved riders between the ages of 40 to 55. In addition, according to AAA, motorcyclists are 27-times more likely to die in a collision as compared to car accidents. The majority of crashes take place in July and August.

Along with the warmer weather, there are other factors the summer months bring that can increase motorcycle accidents. Such factors include:

Speed can also be a major contributor to an accident. According to the National Highway Transportation and Safety Administration, 33-percent of all motorcycle riders involved in fatal crashes were going too fast.

“If they don’t give themselves that reaction time, obviously things can turn fatal or very serious,”  says an experienced Traffic Safety Sgt.

Motorcycle accidents can happen for a variety of reasons, but usually some combination of inattention, inexperience, and intoxication is at the core.

Lane splitting is the act of driving a motorcycle between cars or trucks that have stopped, typically to avoid traffic and practiced by almost all cyclists. Since motorcycles are smaller and narrower than most vehicles on the road, they can fit between other vehicles and move along the lines that indicate each lane. This is incredibly dangerous and illegal in New Jersey, which means you can end up with a ticket, or, even worse, be critically injured or killed.

When a motorcyclist is involved in an accident, the first and foremost step is to seek medical attention immediately as well as get to safety. Secondly, contact the police, or have someone else do it, and gather evidence. The police are an important authoritative figure that can help you gather evidence you need for your potential case. Being able to prove the liability of the other party after a motorcycle accident is often the difference between getting a settlement and the insurance company limiting their payout to you.

Make sure to gather the following types of evidence for your motorcycle crash case:

Someone must be at fault for the collision to have a valid motorcycle accident case. You cannot claim damages unless there was a negligent party in the accident. Comparative negligence is used to determine responsibility in an accident by each party involved. The amount of fault which you contributed to an accident, like lane splitting, can be used against you and lessen any damages you are awarded after a civil case.

What to Do When a Motorcycle Accident Occurs

If you have been involved in a motorcycle accident due to someone else’s negligence, you’re likely facing expensive repairs to your bike, injuries that will keep you from living your life, and escalating medical bills and permanent health problems. The first step is typically to file a personal injury claim with their auto insurance company. If seeking a settlement through a claim is unsuccessful, you might decide to sue the other driver. Fortunately, New Jersey law allows you to make a civil claim for restitution from the party that caused your accident and injuries. It’s best to seek the representation of an experienced personal injury attorney in New Jersey. The Office of Andrew Maze  has been successfully representing New Jersey injury victims for over 30 years. Call us today for a free consultation at  732-750-5000.

When you purchase something, you expect that the product is safe to use or eat. But, sometimes, defective products slip by quality control and into the hands of consumers. Lithium-ion batteries, for example, have been recorded to seriously injure or cause death when they have spontaneously burst into flames. Because…

What would we do without our cell phones? These days, almost everyone uses a cell phone for just about everything, from getting driving directions to searching for what to cook for dinner tonight. It's no wonder we always have one in our hands, even when driving!  Unfortunately, the ability to…

Having a baby is one of the most exciting events, especially if the impending birth is the first in a family. After nine months of pregnancy, a mother-to-be is happy to welcome a healthy infant into the world. But sometimes, the delivery doesn’t go as smoothly as anticipated. Birth injuries…